Our hours of operation are based on our customers needs. Let us know what's convenient for you and we'll do our best to work around YOUR schedule.  Yet another example of what sets us apart!

In October, 2012, Karen and I were able to acquire "Gibson's Mill" in Landisburg, Perry County.  The Mill is steeped in history and is one of the oldest in Perry County.

When William Penn came to .America on his second trip, about 1 700, a fellow passenger was Francis West, who came from the family seat at Westover, England, and who, with his family, took up large tracts along Sherman's Creek, as narrated in the chapter devoted to Spring Township.

His daughter, Ann West Gibson, who became the mother of that peerless dispenser of justice, Chief Justice John Bannister Gibson, warranted lands in 1787, and before 1779, when it was already assessed, had erected what she called the "Westover Mill,"

This Mill was built by Ann West Gibson, mother of Chief Justice Gibson. Known generally as the Gibson mill, and which included a sawmill. It is located several hundred yards west of Gibson's Rock, a mighty profile jutting to the edge of the creek. The water by which the mill is run does not come from Sherman's Creek, however, but from a smaller stream which flows through the wooded hills surrounding.

It was in regular use as a gristmill until 1850. Then, after a period of idleness covering almost twenty years it was turned into a spoke and felloe factory by Frank Gibson, and later into a paint Mill. Then for some years it was destined to idleness, but was again put in operation as a gristmill and is now in the ownership of S. V. Dunkelberger.

An addition was erected to it in 1871, and at that time there was no mill machinery in the place. It is operated by an eighteen-foot overshot water wheel of the old type. Both the burr and modern roller process types of machinery are in use. On a corner of the foundation of this old historic landmark is this inscription plate: "U. S. Geological Survey; Elevation above sea level, 471 feet. A. D. 1903." The original mill is described as being a "log structure, with only one run of stone." It will be noted that the top story is not of stone. The original Mill tract is spoken of as containing seventy-eight acres. 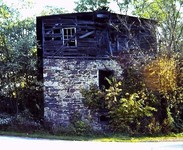 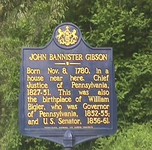